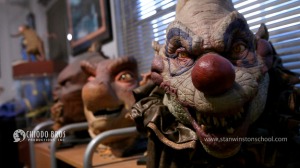 Three innovative, awesome men are coming to the show! You’re like, “three innovative, awesome men already host the show.” True. And thank you, but these three men are way better than us at a lot of things. Things like puppetry, stop-motion animation, animatronic doo-hickeys, those kinds of things. The Chiodo Brothers will be joining us to talk about their amazing careers! They have created characters for movies and TV shows like Critters, Team America: World Police, The Thundermans, Elf and of course, the movie they wrote and directed Killer Klowns from Outer Space! These three men are American treasures and we will be nerding out the entire time they’re on the show. Considering they were also responsible for about 93% of my recurring nightmares as a child, things should get interesting. More important than my nightmares, however, is probably the recently announced Return of the Killer Klowns from Outer Space in 3D.

Click this thing right here to see the awesome show it became!