Who?  Exactly. When asked to rattle off the names of great character actors, the men who have populated our movie and television screens come to mind. Rarely does anyone mention a great character actress. Well, that’s what Mary Grace Canfield was – a great character actress. Best known for her recurring role as “Ralph Monroe” of the Monroe Bros. on TV’s classic surreal sitcom “Green Acres”, Ms. Canfield had a career that spanned 40 years and appearances on such shows as “Alfred Hitchcock Presents”, “Bewitched”, “Love, American Style”, “The Love Boat”, and “Cagney and Lacey”. 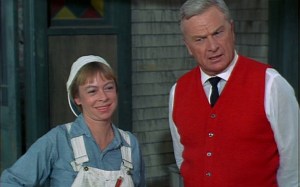 She appeared in my favorite episode of one of my favorite classic television shows (“The Hollow Man” episode of “Thriller”) and made one of her last appearances in a criminally underrated fantasy film from Disney – 1983’s “Something Wicked This Way Comes.” 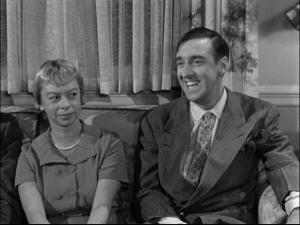 Ms. Canfield made a career out of playing “ugly duckling” roles, most famously in what I feel is an oddly cruel episode of the usually genteel “Andy Griffith Show”.  In “A Date for Gomer”, she plays Thelma Lou’s cousin who gets set up on the title date. Barney refers to her as a dog several times and Mr. Griffith isn’t much nicer. What makes it even crueler is that the character’s name is “Mary Grace”. I always wondered how Ms. Canfield felt about playing the plane-Jane type roles for 40 years.  I suspect she was just happy to be a working actress.

Thank you for your performances, Ms. Canfield…